This is a land that welcomes its visitors with open arms. Burgos has some tourist attractions that are unique on the national scene. A cultural and artistic heritage mainly consisting of three items recognized as World Heritage by UNESCO: the Gothic Cathedral, the Camino de Santiago and the sites of Atapuerca. And just five minutes walk from the historic centre, the modern complex of the Human Evolution, by the architect Juan Navarro Baldeweg, that consists of the Museum of Human Evolution, the National Center of Research and the Congress Hall and Auditorium.

Burgos was founded in 884, and its historical heritage is always evident to the visitor. It is a monumental city, charming for the so typical Medieval Northern Castilian ambience. Together with the three UNESCO World Heritage Sites, there are some other important monuments such as the Cartuja de Miraflores or the Monastery of Las Huelgas. Burgos surely is a very attractive city for tourism. 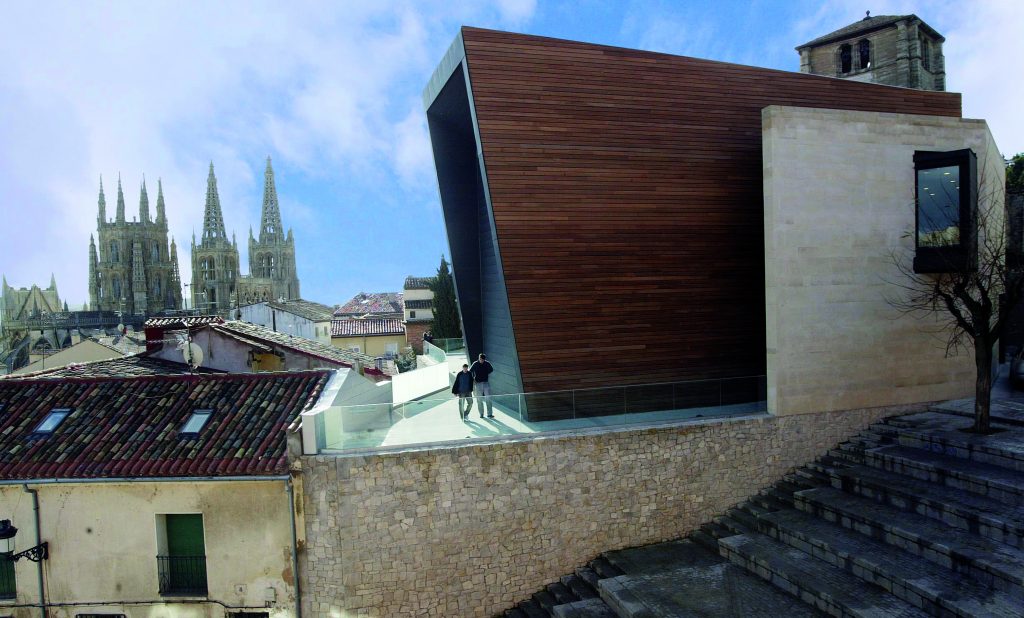 In general, Burgos is a quiet, peaceful and clean city you may visit by foot or bike. There are many town squares (“plazas”), long avenues with stretches of green corridors and parks. Do not forget to go sightseeing along the Arlanzón River, a classic afternoon walk among locals.

Also, you should try to get out-and-about around the countryside, where you will find many villages of extraordinary historical-artistical value. 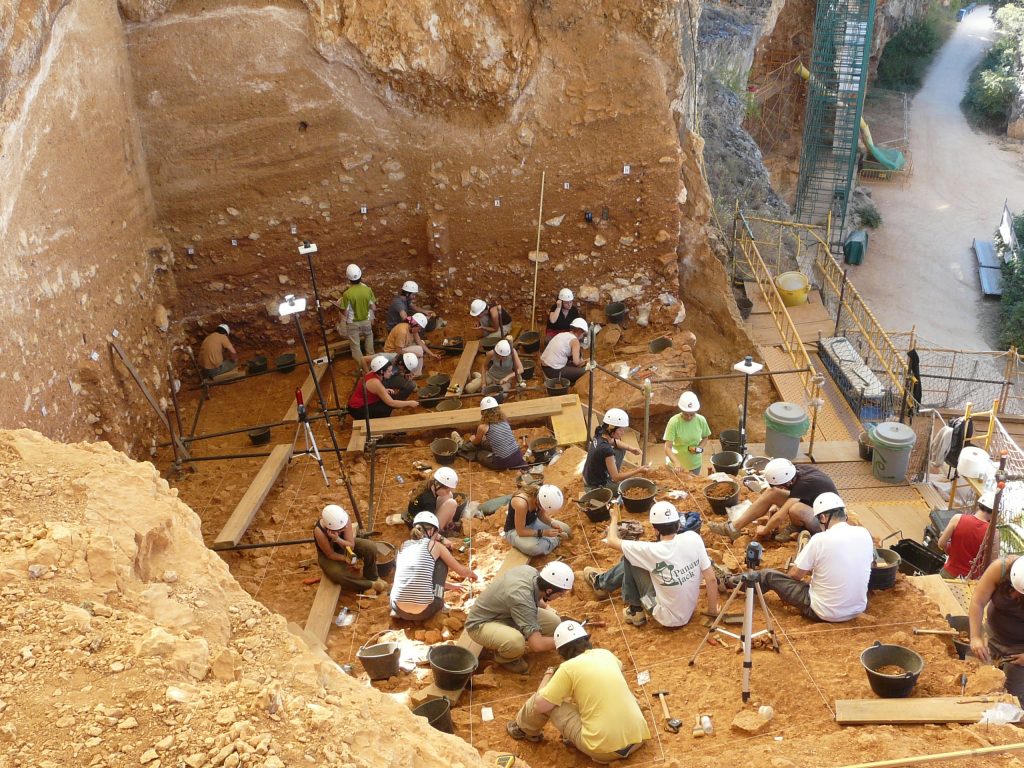 The Arlanzón Valley has been an ideal setting for human settlers since the beginning of time, as evidenced by, the Atapuerca Archeological Site, considered the birthplace of the  European. The human remains found in the area are over 800,000 years old. In this area, bordering the River, there used to be Pre-Roman settlements as well.

The first bits of information we can find about Burgos as a city go back to the year 884, when it is believed that the Count Diego Rodriguez Porcelos founded it under the orders of King Alfonso III. The Kings’ intentions were to establish a fortress in order to stop the enemy’s advance, the Saracens.

The city’s geographical situation, at the crossroad of major routes and at the centre of the Trail of St. James, facilitated its speedy growth. In the X century, Burgos was already a relevant city of Castilla and a vital key piece in the Renaissance. Important figures in those days were Fernán Gómez y Rodrigo Díaz de Vivar, the Cid Campeador (the most popular son of Burgos around the Globe).

The XI century brings with it a downfall in the military relevance of the city, which begins to shine for its trade thanks to the Trail of St. James and its connection with the Northern Ports. In 1075, Burgos becomes the Religious Capital, which facilitated the construction of Monasteries.

In the XIII Century, the old Roman Cathedral is taken down and the construction of the current Cathedral begins in 1221. It is an outstanding Gothic element in the city and one of the most beautiful cathedrals around the World. The Huelgas Reales Monastery is also built around the same time. 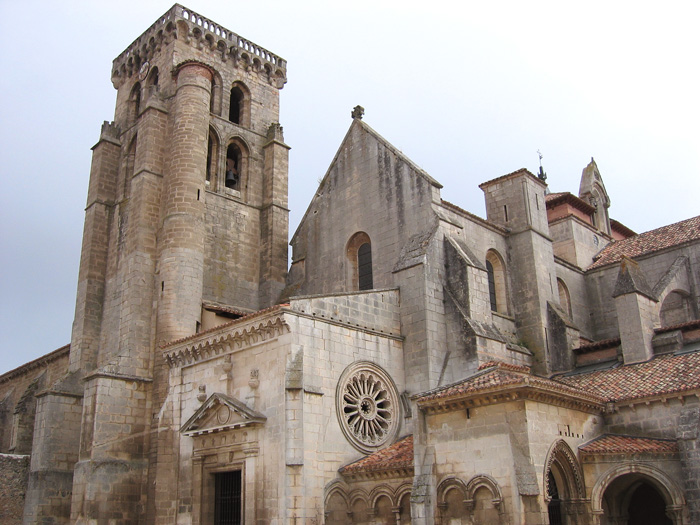 The Golden Days of Burgos were the XV and XVI centuries, during the reign of the Catholic Kings. A variety of great palaces were built, such as the Casa Del Cordón. During those days, the city reaches  25,000 citizens, Despite this boom and mainly due to the new trade established with the New World. Burgos loses a lot of its relevance by 1575. Halfway through the XVII century, the Plague and famine take the number of citizens down to 4,500.

In the XVIII Century, the city shows signs of improvement and by the XIX Century, after the occupation of the city by the French army: Burgos begins to acquire its current geography and stature. In the XX century the first industries begin to appear in the city and in the 60’s, the city’s’ industrial area is created, basically bringing the city back to life.

BURGOS, BIRTHPLACE OF THE FIRST EUROPEAN

BURGOS IS A TRUE PARADIGM OF INNOVATION AND HUMAN EVOLUTION

Not in vain the history of man back here more than in any other part of Europe, nothing less that up to 1.2 million years ago. This is the age of the remains of the first European, the so-called Homo Antecessor, found in the deposits of the Sierra de Atapuerca, declared World Heritage in 1997.

Few places in the world allow you to combine the visit to parts obtained with their place of origin, as in the case of the Museum of Human Evolution and the sites of Atapuerca. Burgos offers the possibility to go in search of the first European by a shuttle that connects the Museum (with an area of 13,550 square meters, where you can see the largest permanent exhibition on human evolution) the fields. 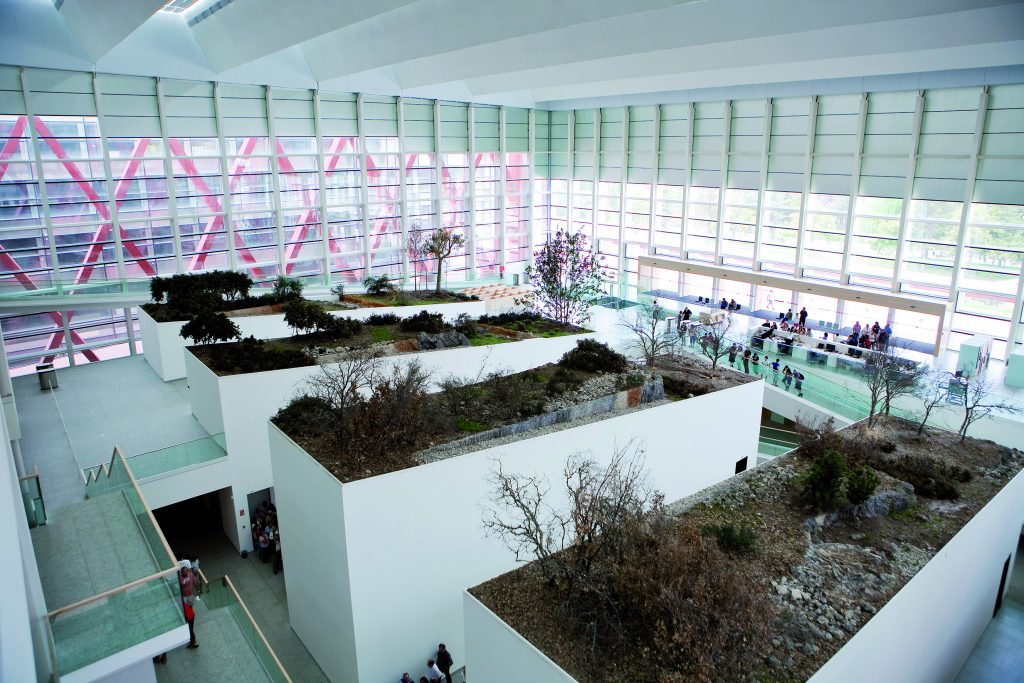 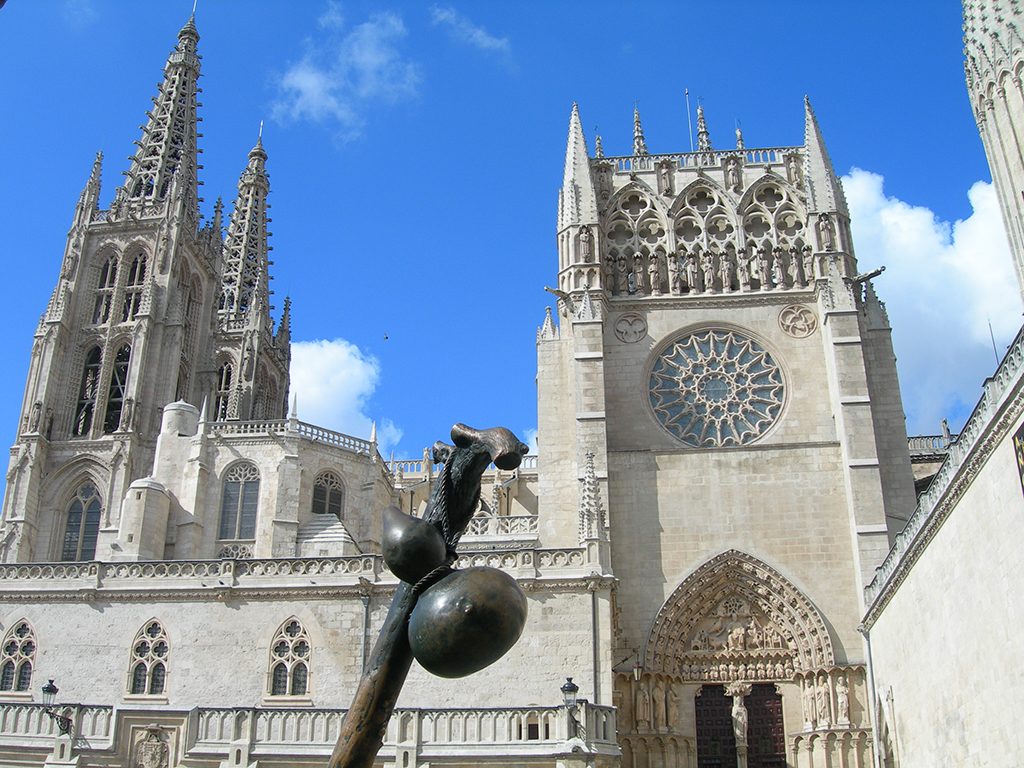 Its construction began in 1221 over an old Romanesque cathedral, built between 1080 and 1095, in the area occupied by the Palace of the Kings of Castile  which had become too small. Their impellers were King Ferdinand III of Castile and Bishop Mauricio, who after his trip to France and Germany to arrange the marriage of the monarch with Beatriz de Suabia, was impressed by the great French Gothic temples , bringing with him the first Foreman for of the cathedral.

The Cathedral, completed in 1567, is a comprehensive example of the evolution of the Gothic style, with the entire history of the Gothic Art exhibited in its superb architecture and unique collection of art, including paintings, choir stalls, reredos, tombs, and stained-glass windows.

The Arco de Santa María is one of the most emblematic monuments in Burgos. In the Middle Ages it was one of the old twelve gates to the city. This gate, conceived as a great triumphal arch, connects the Santa María bridge with the Plaza del Rey San Fernando, where the Cathedral stands.

Inside the Arch you can access the Sala de Poridad, the meeting place of the old Municipal Council. This room houses various curiosities:  a bone of the Cid Campeador, a reproduction of the sword Tizona del Cid among various other things…. In this room there is an access to the outer tower from where you can see beautiful views of the city.

On the upper floor of the Arco de Santa María there is an interesting collection of the “Botamen” (set of old pharmacy containers) that comes from the now defunct Hospital de San Juan, whose apothecary was one of the most important in the country. 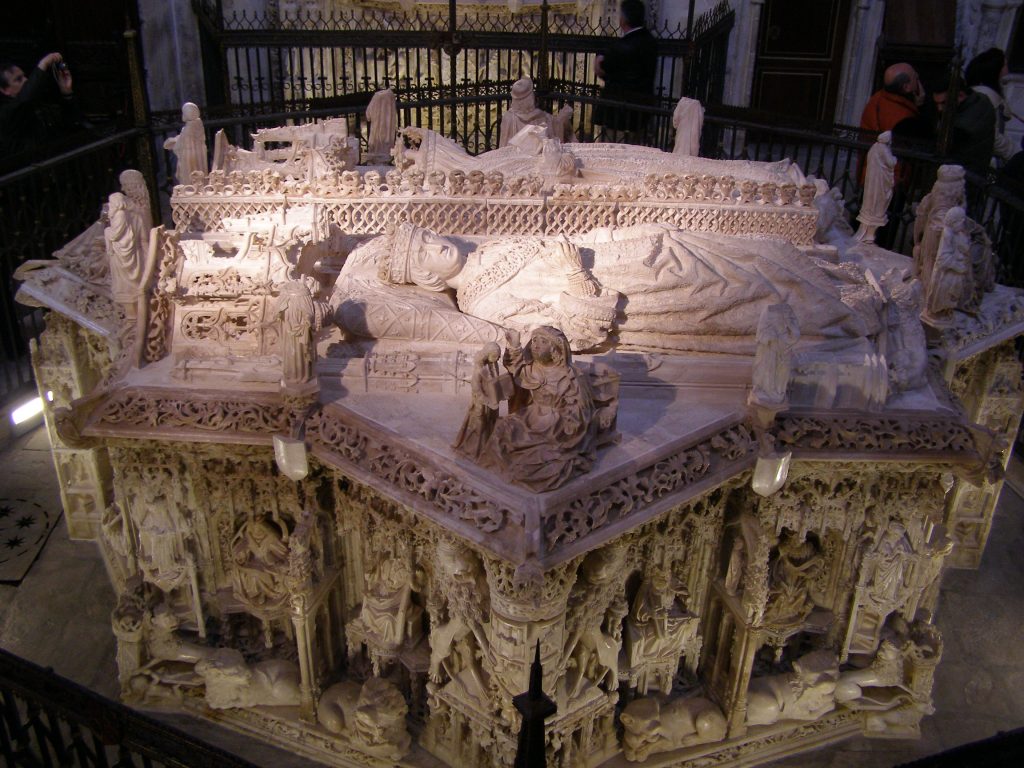 Located in the peaceful woodlands 4km east of the City Centre, it is one of the most interesting monuments from the end of the European Gothic period. Situated on an old Royal Palace, this monastery was founded in the 15th century as a Royal Pantheon. The alabaster sepulchres of the Kings of Castile, John II and Isabella of Portugal, and of Infante Alfonso, (parents and brother of Isabella I of Castile) are located in the centre of the Head of the church of La Cartuja, under the great altarpiece decorated with the gold brought by Christopher Columbus from his second trip to The Americas. Built between 1489 and 1493, they form one of the most extraordinary funerary ensembles of all European Gothic sculpture. 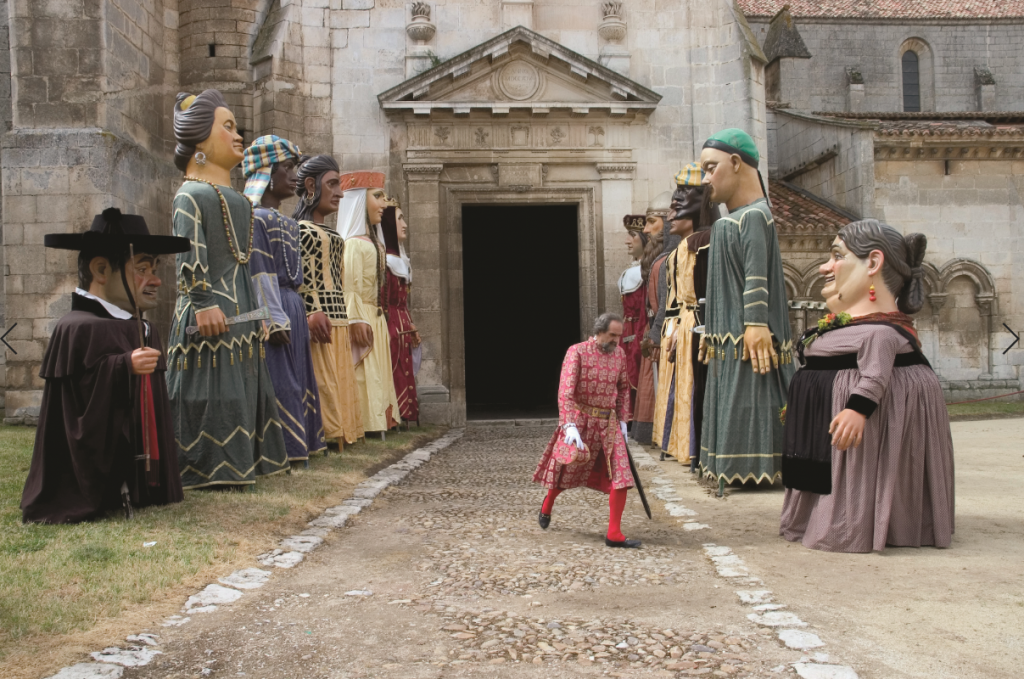 Located about a 30-minute walk west of the City Centre on the southern river bank, this monastery was once among the most prominent in Spain. Founded in 1187 by Eleanor of Aquitaine, daughter of Henry II of England and wife of Alfonso VIII of Castilla, is still home to 35 Cistercian nuns. This veritable Royal Pantheon contains the tombs of numerous kings and queens, as well as a spectacular gilded Renaissance Altar. The highlight, though, is the Museo de Ricas Telas, reached via a lovely Romanesque cloister and containing bejewelled robes and royal garments. 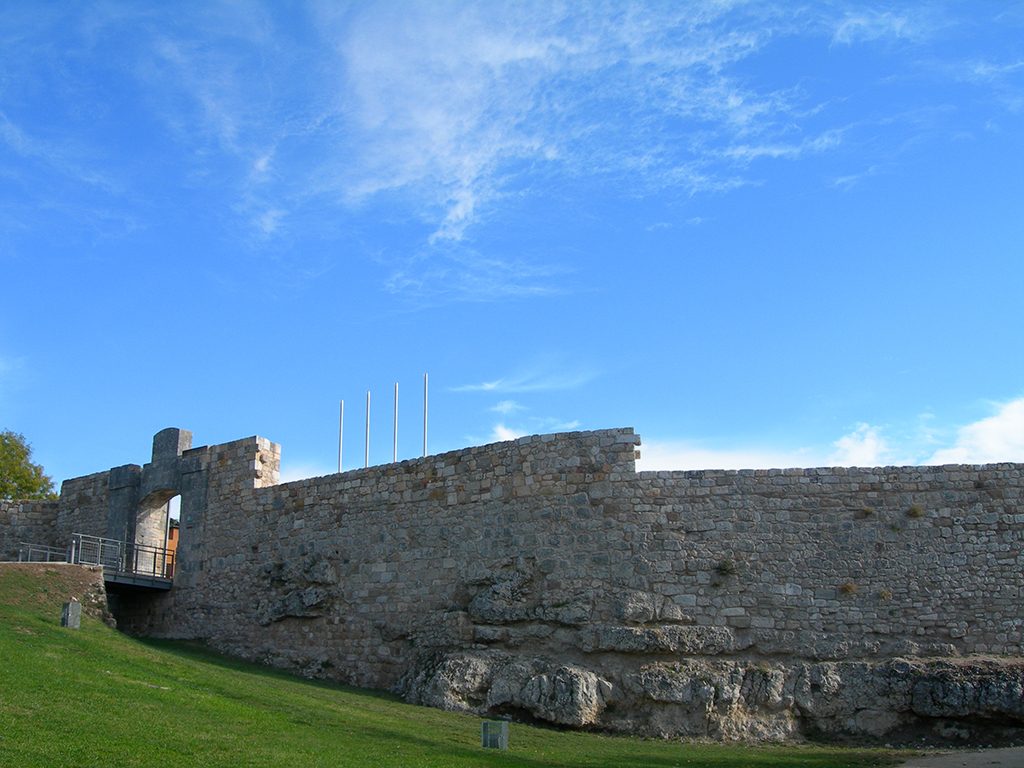 The hill of the Castle is witness of the history of Burgos from its origins.
The Castle dates back to the time of Count Diego Porcelos, founder of the city of Burgos in 884. Burgos lived under the protective mantle of a walled enclosure that safeguarded the first settlers from incursions by Muslim armies.

Throughout history this castle served  as a place to house kings and infants, prison and gunpowder factory , among other uses.
If you wish to visit the remnants of the fortress destroyed by Napoleon’s troops at the beginning of the 19th century, you can access the enclosure, walls, well and underground galleries.

Nowadays, the Castle Interpretation Centre has become an essential point as it features both the visit to the city of Burgos due to a double condition of an extensive natural space and a historical monument.
From the Mirador del Castillo you can contemplate the entire Historic Centre of the city, with the Burgos Cathedral on the foreground.